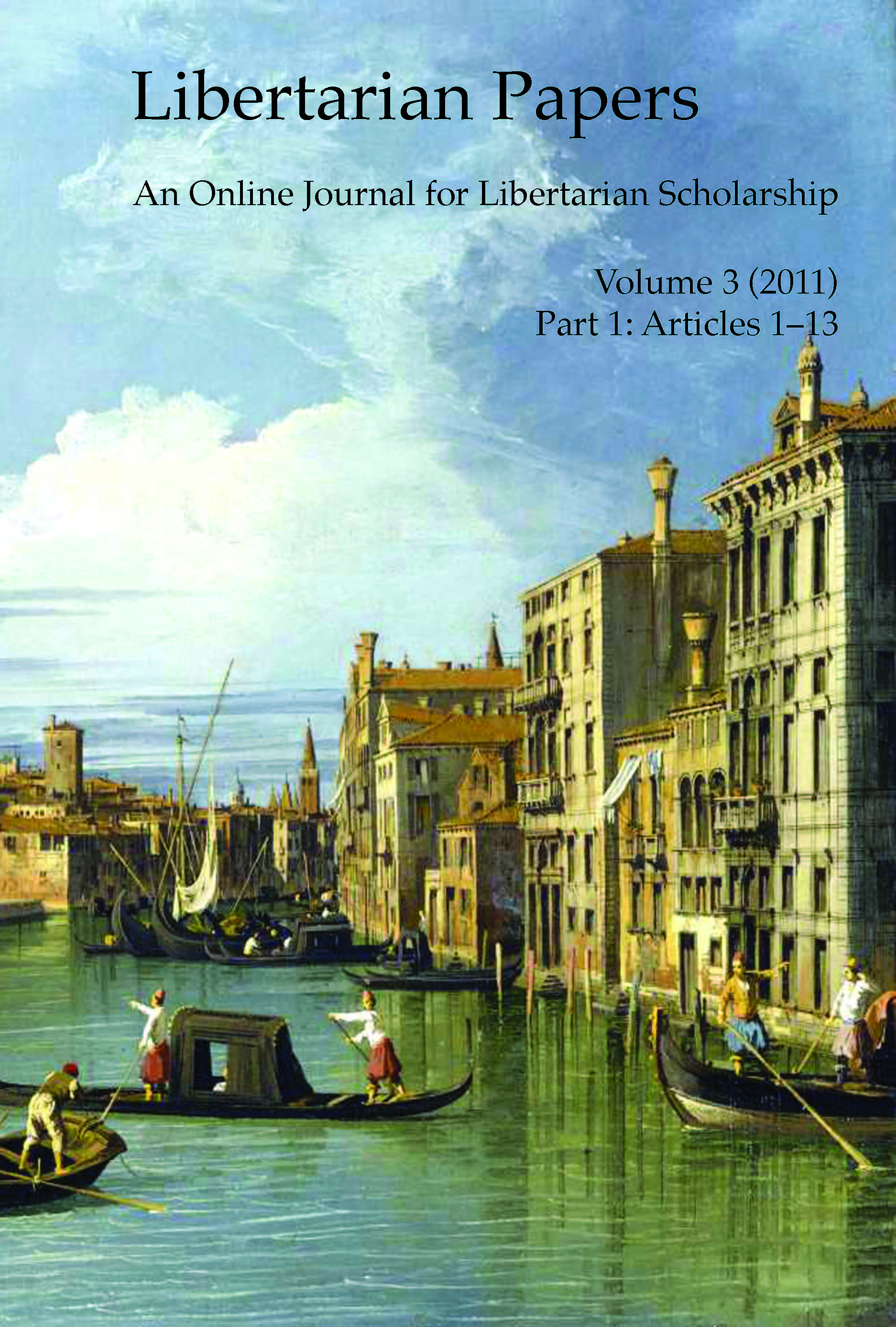 As noted previously, Libertarian Papers articles will occasionally be collected into Parts (like issues) and offered for sale in print versions and epub versions on the major epub retailers (see Libertarian Papers, Vols. 1 and 2, Now Available in Print and Ebook). The first two volumes have already been published this way; ebook versions for the first four issues are sold at $9.99, and print versions sold a slightly above the print-on-demand cost (with a discount at CreateSpace if you use the discount code TV6PLDNW). They may be ordered here.

Volume 3, Part 1, has just been released as well, in several formats. It’s 290 pages, and includes the first 13 articles published so far this year:

1. “Of Private, Common, and Public Property and the Rationale for Total Privatization” by Hans-Hermann Hoppe
2. “Plato and the Spell of the State” by Patrick C. Tinsley
3. “Review of Kosanke’s Instead of Politics” by Don Stacy
4. “Response to Wisniewski on Abortion, Round Two” by Walter E. Block
5. “Unity and Integration in Ayn Rand’s Atlas Shrugged” by Edward W. Younkins
6. “Response to Block on Abortion, Round Three” by Jakub Bozydar Wisniewski
7. “Well-Being and Objectivity” by Jakub Bozydar Wisniewski
8. “Truth in Philosophy” by Tibor R. Machan
9. “The Economic Nobel Prize” by Nikolay Gertchev
10. “Free Markets, Property Rights and Climate Change: How to Privatize Climate Policy” by Graham Dawson
11. “Review of Eagleton’s Why Marx Was Right” by Morgan A. Brown
12. “Contra Copyright, Again” by Wendy McElroy
13. “The Causes of Price Inflation & Deflation: Fundamental Economic Principles the Deflationists Have Ignored” by Laura Davidson

A couple of changes from the previous releases. First, since the page count is lower (290 pages versus over 400), the price is lower: $11.99 with discount code TV6PLDNW), Amazon ($12.99); Kindle version is $5.99. Second, due to popular request from readers, we are going to use different cover designs for each published issue going forward. The first two volumes used the same image used for the journal’s website–Canaletto’s Piazza San Marco: Looking South-East (1735–40). The cover image for Vol. 3, Part 1 is Canaletto’s The Grand Canal and the Church of the Salute (1730). Ordering information is below: