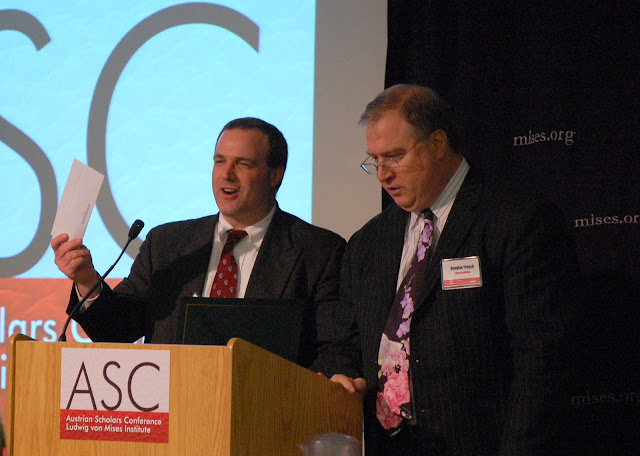 The O.P. Alford III Prize in Libertarian Scholarship is a $1000 prize awarded by the Mises Institute each year for the the article published in the preceding volume of Libertarian Papers that best advances libertarian scholarship, as chosen by the journal’s Editor and Editorial Board.

There were forty-four articles were published in Libertarian Papers in 2009. The 2009 award was given by Mises Institute President Doug French at the Austrian Scholars Conference 2010 to Gil Guillory and Patrick C. Tinsley, for their article “The Role of Subscription-Based Patrol and Restitution in the Future of Liberty.” This paper is a pioneering effort to advance the theory of the private production of justice. Guillory and Tinsley integrate and blend the theoretical and the practical, and set forth a detailed and practical plan to begin to establish such private institutions. Their article is creative and bold, informed by existing libertarian theory while extending it. As one member of the journal’s Editorial Board noted, “This paper presents a carefully worked out business plan for organisations that would provide an effective, superior alternative for tax-funded monopolies in deterring common types of crime and providing restitution to victims of such crimes. It is an original and path-breaking effort not only because of its concern with practical matters but also because of its deep understanding of the issues involved in developing a libertarian theory of social organization. While the paper’s primary focus is on the United States of America, a relatively young but highly developed and complex society, it opens up lines of enquiry and suggests methods that are bound to be of interest to libertarians everywhere.” Guillory and Tinsley are to be commended for their careful, meticulous, and systematic study.